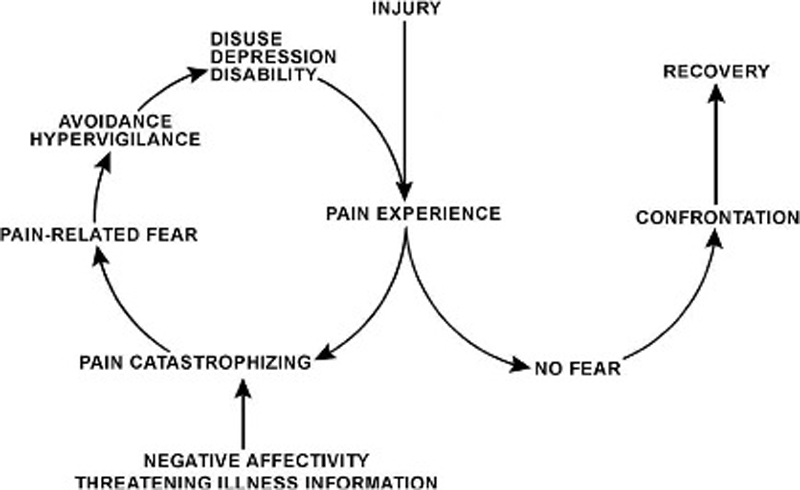 Fear of pain demonstrates significant prognostic value regarding the development of persistent musculoskeletal pain and disability. Its assessment often relies on self-report measures of pain-related fear by a variety of questionnaires. However, based either on “fear of movement/(re)injury/kinesiophobia,” “fear avoidance beliefs,” or “pain anxiety,” pain-related fear constructs plausibly differ while it is unclear how specific the questionnaires are in assessing these different constructs. Furthermore, the relationship of pain-related fear to other anxiety measures such as state or trait anxiety remains ambiguous. Advances in neuroimaging such as machine learning on brain activity patterns recorded by functional magnetic resonance imaging might help to dissect commonalities or differences across pain-related fear constructs. We applied a pattern regression approach in 20 human patients with nonspecific chronic low back pain to reveal predictive relationships between fear-related neural pattern information and different pain-related fear questionnaires.

More specifically, the applied multiple kernel learning approach allowed the generation of models to predict the questionnaire scores based on a hierarchical ranking of fear-related neural patterns induced by viewing videos of activities potentially harmful for the back. We sought to find evidence for or against overlapping pain-related fear constructs by comparing the questionnaire prediction models according to their predictive abilities and associated neural contributors. By demonstrating evidence of nonoverlapping neural predictors within fear-processing regions, the results underpin the diversity of pain-related fear constructs. This neuroscientific approach might ultimately help to further understand and dissect psychological pain-related fear constructs.

END_OF_DOCUMENT_TOKEN_TO_BE_REPLACED

Pain Location Matters: The Impact of Leg Pain on Health Care Use, Work Disability and Quality of Life in Patients with Low Back Pain

Pain Location Matters: The Impact of Leg Pain on Health Care Use, Work Disability and Quality of Life in Patients with Low Back Pain

PURPOSE:   In low back pain (LBP) patients, those with radiating leg pain or sciatica have poorer pain and disability outcomes. Few studies have assessed the effect of leg pain on health care use and quality of life.

Radiculopathy and Chiropractic Page and the:

END_OF_DOCUMENT_TOKEN_TO_BE_REPLACED

Assessment of Patients With Neck Pain

Assessment of Patients With Neck Pain: A Review of Definitions, Selection Criteria, and Measurement Tools

OBJECTIVE:   The purpose of this literature review was to synthesize the existing literature on various definitions, classifications, selection criteria, and outcome measures used in different studies in patients with neck pain.

METHODS:   A literature search of MEDLINE and CINAHL through September 2008 was performed to gather articles on the reliability, validity, and utility of a wide variety of outcome measurements for neck pain.

RESULTS:   Different types of definitions appear in the literature based on anatomical location, etiology, severity, and duration of symptoms. Classifications according to severity and duration of pain and the establishment of selection criteria seem to play a crucial role in study designs and in clinical settings to ensure homogeneous groups and effective interventions. A series of objective tests and subjective self-report measures are useful in assessing physical abilities, pain, functional ability, psychosocial well-being, general health status, and quality of life in patients with neck pain. Self-administered questionnaires are commonly used in clinical practice and research projects.

END_OF_DOCUMENT_TOKEN_TO_BE_REPLACED

Spinal Manipulation Compared with Back School and with Individually Delivered Physiotherapy

Spinal Manipulation Compared with Back School and with Individually Delivered Physiotherapy for the Treatment of Chronic Low Back Pain: A Randomized Trial with One-year Follow-up

A randomized trial by researchers at an outpatient rehabilitation department in Italy involving 210 patients with chronic, nonspecific low back pain compared the effects of spinal manipulation, physiotherapy and back school. The participants were 210 patients (140 women and 70 men) with chronic, non-specific low back pain, average age 59. Back school and individual physiotherapy were scheduled as 15 1-hour-sessions for 3 weeks. Back school included group exercise and education/ergonomics. Individual physiotherapy included exercise, passive mobilization and soft-tissue treatment. Spinal manipulation included 4-6 20-minute sessions once-a-week.

Outcome measures were the Roland Morris Disability Questionnaire (scoring 0-24) and Pain Rating Scale (scoring 0-6), assessed at baseline, discharge, and at 3, 6, and 12 months. 205 patients completed the study.

At discharge, disability score decreased by:

Spinal manipulation was associated with higher functional improvement and long-term pain relief than back school or individual physiotherapy, but received more further treatment at follow-ups;

pain recurrences and drug intake were also reduced compared to back school or individual physiotherapy.

The difference in their improved scores is quite dramatic:

NOTE: These numbers indicate the reductions in scores on the Roland Morris Disability Questionnaire and the Pain Rating Scale.

OBJECTIVE:   To compare spinal manipulation, back school and individual physiotherapy in the treatment of chronic low back pain.

END_OF_DOCUMENT_TOKEN_TO_BE_REPLACED

Brief Screening Questions For Depression in Chiropractic Patients With Low Back Pain:

Brief Screening Questions For Depression in Chiropractic Patients With Low Back Pain: Identification of Potentially Useful Questions and Test of Their Predictive Capacity

Background   Depression is an important prognostic factor in low back pain (LBP) that appears to be infrequent in chiropractic populations. Identification of depression in few patients would consequently implicate screening of many. It is therefore desirable to have brief screening tools for depression. The objective of this study was to investigate if one or two items from the Major Depression Inventory (MDI) could be a reasonable substitute for the complete scale.

Methods   The MDI was completed by 925 patients consulting a chiropractor due to a new episode of LBP. Outcome measures were LBP intensity and activity limitation at 3-months and 12-months follow-up. Single items on the MDI that correlated strongest and explained most variance in the total score were tested for associations with outcome. Finally, the predictive capacity was compared between the total scale and the items that showed the strongest associations with outcome measures.

Results   In this cohort 9% had signs of depression. The total MDI was significantly associated with outcome but explained very little of the variance in outcome. Four single items performed comparable to the total scale as prognostic factors. Items 1 and 3 explained the most variance in all outcome measures, and their predictive accuracies in terms of area under the curve were at least as high as for the categorised complete scale.

Conclusions   Baseline depression measured by the MDI was associated with a worse outcome in chiropractic patients with LBP. A single item (no. 1 or 3) was a reasonable substitute for the entire scale when screening for depression as a prognostic factor.

Pain and depression often co-exist [1-3] , and although the causal relation between the two is not clear, [4, 5] evidence suggests that pain negatively affects outcome in depression as well as vice versa [6].

Low back pain (LBP) is a highly frequent pain condition with a substantial impact on global health [7] for which the risk of a poor prognosis is increased in the presence of depression [8, 9] . It is a condition for which there is no generally effective treatment, but non-pharmacological treatment addressing psychological symptoms in addition to the physical symptoms has been demonstrated to improve outcome in LBP patients with high scores on psychological questions [10].

Low Back Pain Page and the:

The Biopsychosocial Model Page and the:

END_OF_DOCUMENT_TOKEN_TO_BE_REPLACED

While the use of complementary, alternative and integrative medicine (CAIM) is substantial, it continues to exist at the periphery of allopathic medicine. Understanding the attitudes of medical students toward CAIM will be useful in understanding future integration of CAIM and allopathic medicine. This study was conducted to develop and evaluate an instrument and assess medical students’ attitudes toward CAIM. The Complementary, Alternative and Integrative Medicine Attitudes Questionnaire (CAIMAQ) was developed by a panel of experts in CAIM, allopathic medicine, medical education and survey development. A total of 1770 CAIMAQ surveys (51% of US medical schools participated) were obtained in a national sample of medical students in 2007.

The students held the most positive attitude for the “mind-body-spirit connection” and the least positive for the “desirability of CAIM therapies”. This study provided initial support for the reliability of the CAIMAQ. The survey results indicated that in general students responded more positively to the principles of CAIM than to CAIM treatment. A higher quality of CAIM-related medical education and expanded research into CAIM therapies would facilitate appropriate integration of CAIM into medical curricula. The most significant limitation of this study is a low response rate, and further work is required to assess more representative populations in order to determine whether the relationships found in this study are generalizable. END_OF_DOCUMENT_TOKEN_TO_BE_REPLACED