The Course of Serum Inflammatory Biomarkers

The Course of Serum Inflammatory Biomarkers Following Whiplash Injury and their Relationship to Sensory and Muscle Measures: A Longitudinal Cohort Study 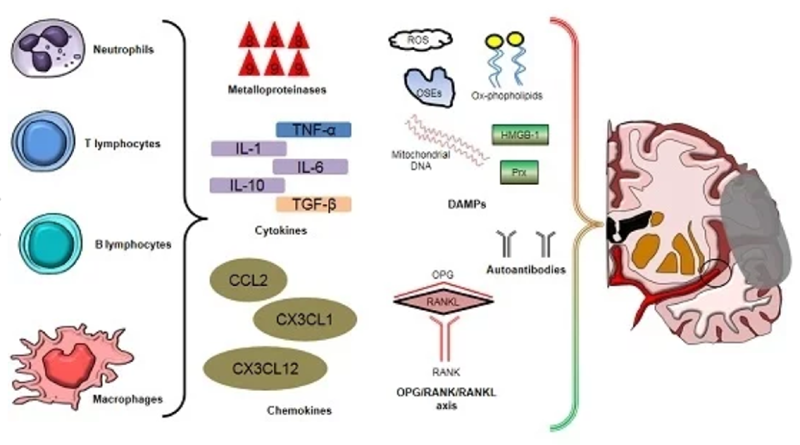 Tissue damage or pathological alterations are not detectable in the majority of people with whiplash associated disorders (WAD). Widespread hyperalgisa, morphological muscle changes and psychological distress are common features of WAD. However little is known about the presence of inflammation and its association with symptom persistence or the clinical presentation of WAD. This study aimed to prospectively investigate changes in serum inflammatory biomarker levels from the acute (<3 weeks) to chronic (>3 months) stages of whiplash injury.

It also aimed to determine relationships between biomarker levels and hyperalgesia, fatty muscle infiltrates of the cervical extensors identified on MRI and psychological factors. 40 volunteers with acute WAD and 18 healthy controls participated. Participants with WAD were classified at 3 months as recovered/mild disability or having moderate/severe disability using the Neck Disability Index. At baseline both WAD groups showed elevated serum levels of C-reactive protein (CRP) but by 3 months levels remained elevated only in the moderate/severe group.

The recovered/mild disability WAD group had higher levels of TNF-α at both time points than both the moderate/severe WAD group and healthy controls. There were no differences found in serum IL-1β. Moderate relationships were found between hyperalgesia and CRP at both time points and between hyperalgesia and IL-1β 3 months post injury. There was a moderate negative correlation between TNF-α and amount of fatty muscle infiltrate and pain intensity at 3 months.

Only a weak relationship was found between CRP and pain catastrophising and no relationship between biomarker levels and posttraumatic stress symptoms. The results of the study indicate that inflammatory biomarkers may play a role in outcomes following whiplash injury as well as being associated with hyperalgesia and fatty muscle infiltrate in the cervical extensors.

Whiplash associated disorders (WAD) are a common and costly health problem for western society. Many (up to 50%) of those injured transition to chronicity [1] and current management approaches for both acute and chronic WAD are only modestly effective. [2, 3] Further understanding of processes underlying ongoing pain and disability following whiplash injury may facilitate new directions for management of this condition and improve health outcomes.

WHIPLASH Page and the:

Tissue damage or a specific anatomical lesion is not detectable in the majority of patients with WAD. [4] However convergent data from cadaveric, experimental and clinical studies provides evidence supporting the likely presence of tissue damage, particularly involving the zygaophyseal joint[4]. Following injury, proinflammatory cytokines such as IL-1β and TNF-α, produced by most injured cells and activated immune cells play roles in phagocyte proliferation and activation, adhesion and angiogenesis. [5]  C-reactive protein (CRP) is an acute-phase reactant released by liver cells and is a marker of underlying low-grade inflammation. [6] Despite the traumatic nature of the whiplash event, the involvement of inflammatory processes has not been well investigated. In a small study (n=11), Kivioja et al [7] showed elevated numbers of cytokine releasing immune cells at 3 days post whiplash injury which was not evident at 14 days, suggesting an initial but resolving inflammatory response. However this study did not explore differences between recovered and non-recovered participants or between those with greater or lesser symptoms.

Later findings indicate that such differentiations are important. The presence of features such as widespread hyperalgesia, stress related symptoms and pain catastrophising have been shown to be predictive of poor functional recovery [8, 9] as well as associated with higher reported pain and disability in the early acute post injury stage. [10] The presence of widespread hyperalgesia has been shown to be a consequence of inflammatory processes [11];, stress exposure can lead to the release of cytokines signalling infection or inflammation [12] and relationships between catastrophising and inflammation have been found. [13] The co-occurrence of hyperalgesia and stress related responses/ symptoms in whiplash injured people with poor recovery suggest that investigation of inflammatory processes is warranted.

Whilst the identification of specific injured tissues has proven to be elusive in WAD, recent investigation has consistently demonstrated the presence of morphological muscle changes in the form of fatty infiltrate in the cervical spine muscles of patients with chronic WAD. [14, 15] We have also shown that these fatty infiltrates are present within 4-12 weeks post injury but importantly are significantly greater in participants who develop chronic pain and disability. [16] Although the mechanisms underlying the fatty deposits are not known, circulating inflammatory biomarkers may contribute to degenerative muscle changes. [17, 18]