The Vast Majority of Patients With Fibromyalgia Have a Straight Neck Observed on a Lateral View Radiograph of the Cervical Spine: An Aid in the Diagnosis of Fibromyalgia and a Possible Clue to the Etiology

The Vast Majority of Patients With Fibromyalgia Have a Straight Neck Observed on a Lateral View Radiograph of the Cervical Spine: An Aid in the Diagnosis of Fibromyalgia and a Possible Clue to the Etiology 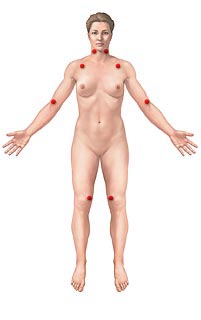 Objective:   A straight cervical spine is an underappreciated and often overlooked finding in fibromyalgia. The aim of this medical records review study was to evaluate the cervical curvature on radiographs of patients with fibromyalgia.

Methods:   A consecutive series of 270 cervical spine radiographs of patients with neck pain from 2015 to 2018 were retrospectively analyzed for cervical curvature using the Cobb angle measurement. One hundred fifty-five patients met full American College of Rheumatology criteria for fibromyalgia, whereas 115 subjects with other rheumatic diseases who were similar in age and education served as control subjects.

RADIOLOGY Section and the:

FIBROMYALGIA Section and the:

Conclusion:   Most patients with fibromyalgia share an abnormality in common that is verifiable by a simple radiograph. In 83.2% of the patients, the cervical spine was essentially straight (Cobb angle ≤10 degrees). In fibromyalgia patients, the loss of cervical curvature was approximately 6.5 times greater than in control subjects (50.3% vs. 7.8%). A straight neck without other radiographic abnormalities may be a major anatomical abnormality in fibromyalgia that has gone unnoticed. It may assist in the diagnosis, as well as suggest increased muscle tension/pressure as a possible etiology.

Vertebrae from the base of the skull to C7 constitute the first of 4 structural curves of the spine1 and form the cervical lordotic curve. With an apex that curves naturally forward analogous to a reverse “C,” the 7 vertebrae create curvature in the magnitude of 21 to 43 degrees. [2, 3] With proper alignment, the cervical spine acts in synergy with the 3 adjacent curves (thoracic, lumbar, and sacral) to confer posture, mobility, and balance of the spine. Working in unison, the 4 curves of the spine form a spring-like structure that protects the body from vibrations arising from motion. [4]