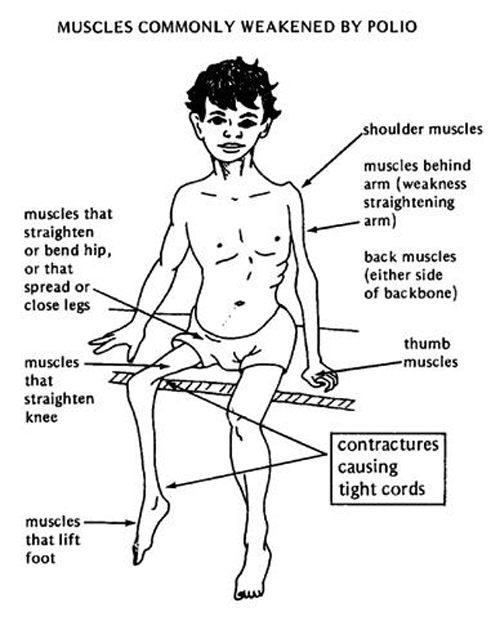 Most developed countries eliminated paralytic poliomyelitis (polio) in the 1970s to 1980s. It was believed that after recovery from acute paralytic poliomyelitis, the physical condition of survivors would remain stable for the rest of their lives. However, the elimination of polio does not equate the end of medical management of polio. Hundreds of thousands of polio survivors worldwide are still at risk of developing the late effects of the disease. Here, we report a case of post-polio syndrome who attended our clinic for the presence of new weakness and neuromuscular problems six decades after recovery from paralytic polio. It is essential that health professionals be aware of these conditions and have an understanding of the underlying pathophysiology of the symptoms.

A 59-year-old woman presented with back pain, progressive muscle weakness and cramps in the left leg. She gave a history of paralytic polio at the age of 2, which left her with permanent flaccid weakness in the left upper limb. She stated that her left leg was also initially affected but it had subsequently recovered. The new symptoms (weakness and cramps) were mainly in the muscle groups of the left (recovered) leg, progressing for over one year. The leg weakness was accompanied by low back soreness. After consulting her orthopedic doctor, she was prescribed with ibuprofen (a nonsteroidal anti-inflammatory drug), which provided little relief.

On examination, the patient presented with a waddling gait and could walk with a cane. She had muscle wasting of the left arm and forearm, showing clear-cut evidence of old polio. The right arm and right leg were neurologically normal. Motor strength in the lower limbs was graded as 4/5 at left L3-S1, and 5/5 at right L3-S1. Except for lumbar scoliosis, the X-ray findings were essentially normal. Needle EMGs revealed denervation of the muscle groups in both the left upper and lower limbs. Surface electromyography (MyoVision®) revealed severe spasm of bilateral paraspinal muscles throughout the spine. She met the diagnostic criteria [3] for post-poliomyelitis syndrome.

In the first month, chiropractic modalities, including therapeutic ultrasound therapy (three times a week) and myofascial mobilization ie, Graston® technique (one to two times a week), were utilized to release stiffness and restore function of the muscles and joints. In the following two months, spinal adjustments (diversified technique) and spinal traction were performed two times a week to retrain posture and body mechanics in order to reduce the pain during activities of daily living and work.

The patient noticed an increase in leg strength; muscle pain and cramps were relieved during the course of treatment. Reassessment at 3-month treatment completion, her surface EMG with reduced hyperactivity at most vertebral segments was indicative of improved paraspinal neuromuscular functions. She continued the treatment twice a month for further 3 months. At the reassessment at six months of treatment, self-reported improvements were recorded in all four domains of the WHOQOL-BREF. [7]

The scores were reported as