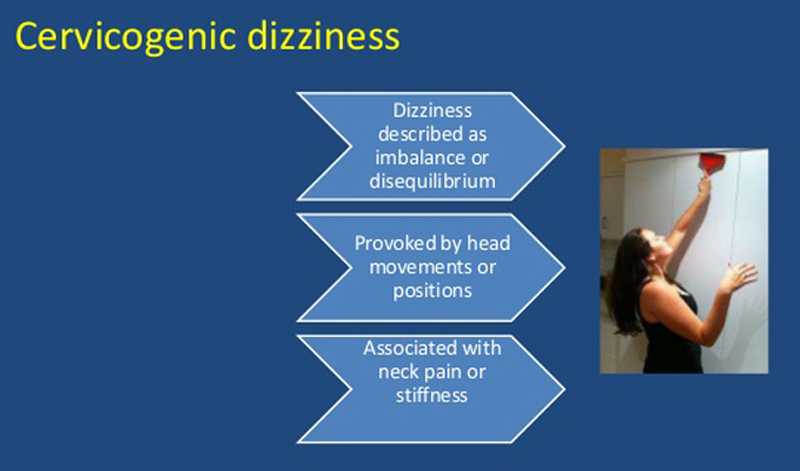 Cervical muscles have numerous connections with vestibular, visual and higher centres, and their interactions can produce effective proprioceptive input. Dysfunction of the cervical proprioception because of various neck problems can alter orientation in space and cause a sensation of disequilibrium. Cervicogenic dizziness (CGD) is a clinical syndrome characterized by the presence of dizziness and associated neck pain in patients with cervical pathology. Here, we report a 24–year-old female, who was diagnosed with CGD based on the correlating episodes of neck pain and dizziness. Both symptoms improved with targeted chiropractic adjustment and ultrasound therapy. CGD is a seemingly simple complaint for patients, but tends to be a controversial diagnosis because there are no specific tests to confirm its causality. For CGD to be considered, an appropriate management for the neck pain should not be denied any patient.

CHIROPRACTIC and VERTIGO and/or BALANCE Page

Cervicogenic dizziness (CGD) is a syndrome of neck pain accompanied by an illusory sensation of motion and disequilibrium due to neck pathology. [1] Current theory suggests that episodes of dizziness are due to disturbed sensory afferents from the neck, leading to a sensory mismatch between cervical, visual and vestibular inputs. [1, 2] The diagnosis is dependent upon the correlating symptoms of disequilibrium and dizziness with neck pain and excluding other vestibular disorders. [1]

Given that cervical proprioception disturbed by persistent neck pain can affect spatial orientation, an appropriate treatment for the neck pain should not be denied any CGD patient. A number of clinical studies including randomized controlled trials [3–6] support the efficacy of manual therapy for CGD.