The Nordic Maintenance Care Program: Maintenance Care Reduces the Number of Days With Pain in Acute Episodes and Increases the Length of Pain Free Periods for Dysfunctional Patients With Recurrent and Persistent Low Back Pain – A Secondary Analysis of a Pragmatic Randomized Controlled Trial 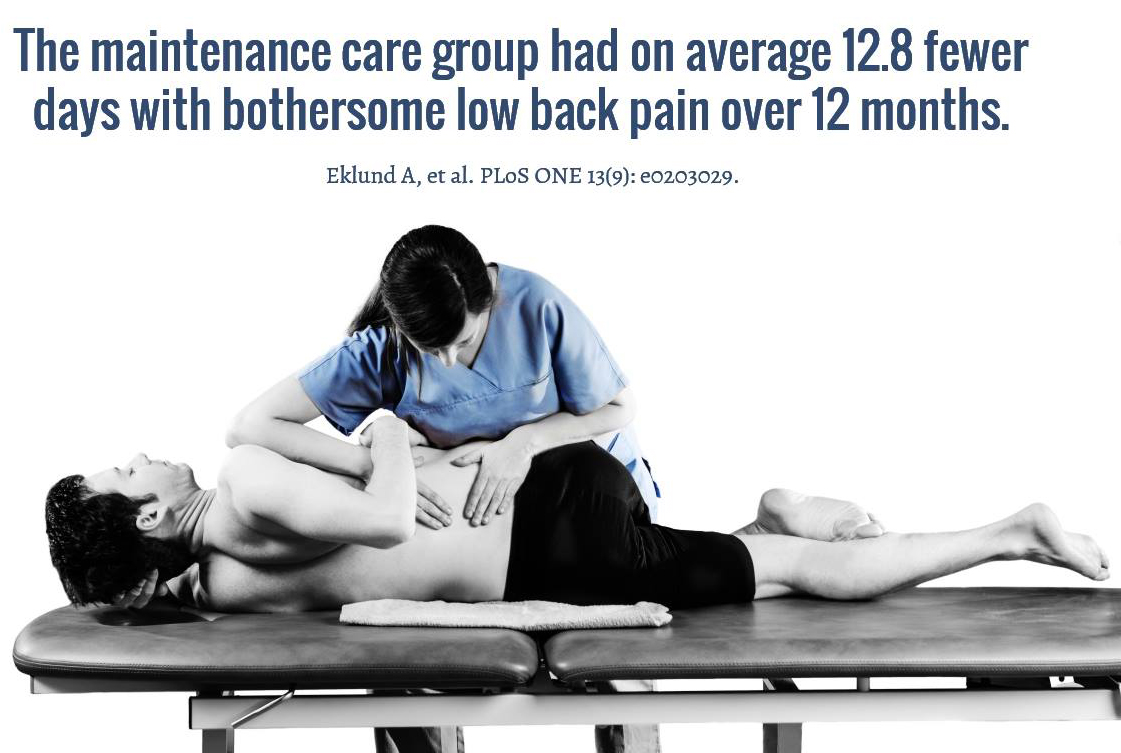 BACKGROUND:   A recent study showed that chiropractic patients had fewer days with bothersome (activity-limiting) low back pain (LBP) when receiving care at regular pre-planned intervals regardless of symptoms (‘maintenance care’, MC) compared to receiving treatment only with a new episode of LBP. Benefit varied across psychological subgroups. The aims of this study were to investigate 1) pain trajectories around treatments, 2) recurrence of new episodes of LBP, and 3) length of consecutive pain-free periods

and total number of pain-free weeks, for all study participants as well as for each psychological subgroup.

METHODS:   A secondary analysis of data from a randomized controlled trial of patients (n = 319) seeking chiropractic care for recurrent or persistent LBP used 52 weekly estimates of days with bothersome (activity-limiting) LBP. First, a generalized estimating equations analysis was used to compare the pain trajectory before and after the initial treatment in every new treatment period. Thereafter, a time-to-event analysis (using Cox regression) estimated time to/risk of a new LBP episode. The analyses were performed on i) all study participants and ii) separately for each psychological sub-group (named adaptive copers, interpersonally distressed and dysfunctional) classified by the West Haven-Yale Multidimensional Pain Inventory.

RESULTS:   Patients receiving MC had flat pain trajectories around each new treatment period and reported fewer days with pain compared to patients receiving the control intervention. The entire effect was attributed to the dysfunctional subgroup who reported fewer days with activity limiting pain within each new LBP episode as well as longer total pain-free periods between episodes with a difference of 9.8 weeks (CI 95% 3.3, 16.3) compared to the control group. There were no differences in the time to/risk of a new episode of LBP in either of the subgroups.

CONCLUSIONS:   Data support the use of MC in a stratified care model targeting dysfunctional patients for MC. For a carefully selected group of patients with recurrent and persistent LBP the clinical course becomes more stable and the number of pain-free weeks between episodes increases when receiving MC. Understanding how subgroups of patients are likely to be affected by MC may help align patients’ and clinicians’ expectations based on realistic outcomes.

Low back pain (LBP) is a recurrent and persistent non-communicable condition ranked highest in in the world in terms of disability and resulting in a major societal burden. [1, 2] Secondary or tertiary preventive strategies are needed to manage a global health challenge such as LBP. A modest number of interventions have been shown to be effective in managing and treating recurrent and persistent LBP. [3] However, only exercise and exercise combined with education have been shown to reduce the number of new episodes. [4–7]

Manual treatments performed by chiropractors have been found to be effective in reducing pain intensity and disability for patients with LBP and are recommended in current practice guidelines. [8, 9] About 98% of all chiropractors who are members of the Swedish Chiropractic Association consider a treatment strategy known as maintenance care (MC) to be clinically useful and beneficial for patients with recurrent and persistent musculoskeletal pain. [10] MC is a secondary/tertiary treatment strategy where patients are treated at regular intervals over a lengthy period of time with the aim of preventing future episodes (secondary prevention) or managing persistent pain (tertiary prevention). [11, 12] In a joint initiative, researchers in Sweden, Denmark and Finland have investigated the frequency, indications and content of MC. [13–21] Based on their findings a multicenter pragmatic randomized clinical trial was conducted in Sweden from 2012 to 2016. [22, 23] The trial found that MC was effective in reducing the total number of days with activity limiting (bothersome)LBP during a 12 month period compared to treatment ‘when needed’. [23] In total the MC group (n = 163) reported 12.8 (95% CI: 10.1, 15.5) fewer days with activity limiting LBP compared to the control group (n = 158) and received 1.7 (95% CI: 1.8, 2.1) more treatments.

In a secondary analysis of the data from the RCT it was found that psychological sub-groups defined by the Swedish version of the West Haven-Yale Multidimensional Pain Inventory (MPI-S) could identify responders and non-responders to MC. [24]

The MPI-S is a comprehensive patient-reported screening instrument based on the cognitive behavioral model which was developed to capture and measure the experience of chronic pain. [25] The Swedish version of the instrument has 34 items that can be used to classify patients into three clinically relevant and valid subgroups: adaptive copers, interpersonally distressed and dysfunctional. [26–29] Adaptive copers (AC) are characterized by low pain severity, low interference with everyday life, low life distress, a high activity level and a high perception of life control. Interpersonally distressed (ID) tend to perceive negative responses by spouses or significant others to their pain behavior and complaints, for example not being supportive/helpful, and expressing irritation, frustration and anger. Dysfunctional (DYS) individuals are characterized by high pain severity, marked interference with everyday life, high affective distress, low perception of life control and low activity levels.

Patients who were classified as dysfunctional reported statistically and clinically significantly fewer days with bothersome (activity-limiting) LBP (– 30.0; 95% CI: – 36.6, – 23.4) in the MC group compared to the control group. On the other hand, patients who were classified as adaptive coper reported a worse outcome where the number of days with bothersome (activity-limiting) LBP was higher (10.7; 95% CI 4.0, 17.5) in the MC groups even though they received a greater number of treatments (3.9; 95% CI: 3.5, 4.2) compared to the control group. There is now compelling evidence that stress the importance of careful the selection of patients for MC to include those who have recurrent or persistent low back pain, a dysfunctional psychological profile and a good initial response to manual therapy.

It is imperative that we undertake research and implement preventive strategies with clear and precise definitions of target populations and disease states. The definition of new episodes for a recurrent disorder such as LBP requires a clear definition of ‘recovery’. De Vet et al. suggested that an episode of LBP should be defined as at least 24 h of pain with at least four pain-free weeks before and after. [30] The prevalence of four consecutive pain-free weeks has been studied in a number of populations and found to represent a good marker of non-episodes. [31–33] In addition, there is a logical inverse dose-response relationship between consecutive numbers of pain-free weeks and previous duration of pain. [31] Thus, a period of four pain-free weeks can be used as a marker of recovery, necessary when defining an episodes. []

The optimal dose of treatments for the long-term management of recurrent and persistent LBP has not been established. In fact, we are not sure whether the effect of MC is a matter of dose (a higher number of visits yielding a reduction of pain irrespective of when the visits occur) or timing (preventing the number of episodes or reducing the number of days within each episode by timing the treatment before or in the early stage of the new event). If the effect of MC is related to the timing of visits, patients who consult at different stages in their long-term pain trajectory and pain around the treatments would have different outcome profiles (i.e. MC treatments should take place before the recurrence of pain and control treatments after the recurrence of pain). The previous secondary analysis of these data, which considered outcome in relation to psychological sub-groups [24], suggested that the outcome is not dependent on number of treatments because the effect of MC seen in the dysfunctional subgroup was achieved with the same number of visits as in the control group. Indeed, a larger number of MC visits could potentially be harmful for some patients, given the outcome for the adaptive coper subgroup. To further our understanding of how MC affects LBP, another secondary analysis of the data from the RCT was performed to investigate the trajectory of pain episodes, the occurrence of (time to/risk of) new episodes of LBP and pain-free periods in relation to patients receiving care when experiencing a symptomatic relapse.