Cost-Efficiency and Effectiveness of Including Doctors of Chiropractic 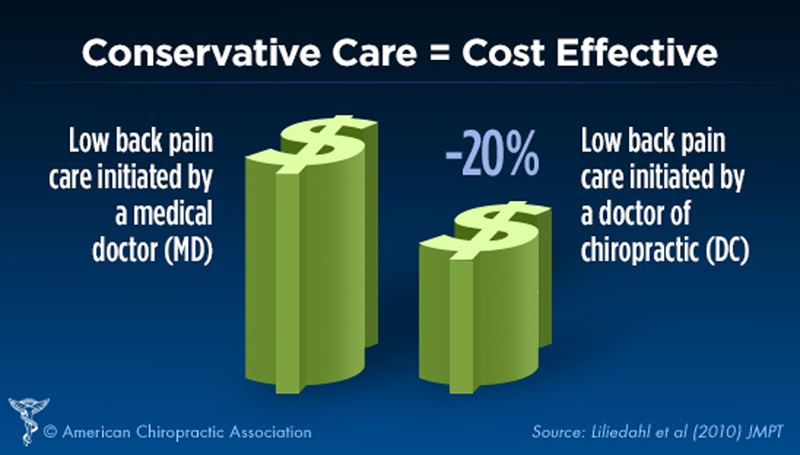 OBJECTIVES:   The objectives of this study were to critically evaluate the methodology and conclusions of the fiscal notes prepared by the state of Missouri for including doctors of chiropractic (DCs) under Missouri Medicaid and to develop a dynamic scoring model that calculates the savings if DCs were allowed to offer treatment under Missouri Medicaid.

METHODS:   We used a secondary analysis to determine the cost-saving assumptions to be incorporated into a dynamic model. We reviewed the literature on efficiency and effectiveness of DC–delivered care regarding the most reliable assumptions concerning cost savings and utilization. The assumptions for percentage savings from DC–provided care and the avoidance of spinal surgeries were then combined in the dynamic scoring model to determine projected cost savings from adding DCs as covered providers under Missouri Medicaid. The actual cost of opioid abuse in Missouri was then determined as a basis to measure cost savings from adding DC care as an alternative therapy for the management of neck and low back pain.

Cost-Effectiveness Page and the:

Because of this, we proposed that the Missouri Health Division used flawed methodology and data in their calculations for the fiscal note regarding the cost of including care from DCs under Missouri Medicaid. After consideration of the approach used in this study, the Committee adopted some important elements of dynamic scoring. Based on our computations and the dynamic scoring model, we determined that there would be a cost savings to the state of Missouri of between $14.1 and $49.2 million once DCs are included as covered providers under Missouri Medicaid. This study also supports the proposition that treatment by DCs for neck and lower back pain may reduce the use and abuse of opioid prescription drugs.

CONCLUSION:   Policymakers may unintentionally rely on flawed assumptions and methodologies such as static scoring, which we propose results in flawed conclusions. Legislative options involve some additional cost. The issue is whether proposed legislative options offer more effective outcomes along with more efficient cost. Using a dynamic scoring model to incorporate savings from 3 primary sources, we found that

(2) chiropractic treatment and care leads to a reduction in cost of spinal surgery, and

(3) chiropractic care leads to cost savings from reduced use and abuse of opioid prescription drugs.

The benefits of care provided by doctors of chiropractic (DCs) have been demonstrated by research throughout the US health care system. [1–4] Reimbursement for such care is now provided by Medicare in all 50 states, and by Medicaid in most states. The decision to provide coverage in each state is based on policymakers’ perceptions of both benefits and cost. The cost of including doctors of chiropractic as covered physicians is often misunderstood. Policymakers may rely on flawed assumptions and methodologies to conclude that adding another provider is more expensive and less effective than current care. This article proposes that DCs deliver care that is more effective and less costly than the current model. This study considers the cost and effectiveness of care delivered by DCs compared with other forms of treatment. Although there are potentially numerous beneficial clinical outcomes [5] from DC treatment, perhaps the greatest clinical outcome is the reduction of neck and low back pain. The analysis for this study is based on research that has been conducted to date.

The purpose of this study was to critically evaluate the methodology and conclusions of the fiscal notes prepared by the state of Missouri for including DCs under Missouri Medicaid. This study also estimated a dynamic scoring model that specifically incorporates cost savings from changes in human behavior.

The 3 major changes incorporated in the model are

(2) cost savings from reductions in spinal surgery, and

(3) cost savings from reduced use and abuse of opioid prescription drugs.