Observed Patterns of Cervical Radiculopathy: How Often Do They Differ From a Standard, “Netter Diagram” Distribution? 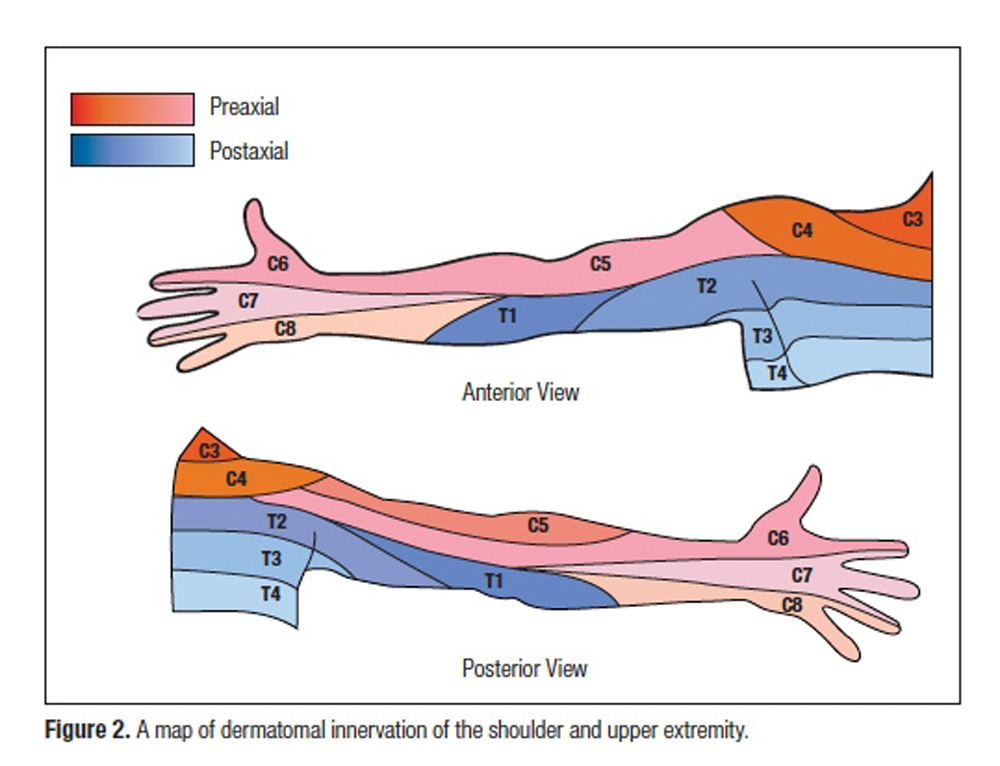 BACKGROUND CONTEXT:   Traditionally, cervical radiculopathy is thought to present with symptoms and signs in a standard, textbook, reproducible pattern as seen in a “Netter diagram.” To date, no study has directly examined cervical radicular patterns attributable to single level pathology in patients undergoing ACDF.

PURPOSE:   The purpose of this study is to examine cervical radiculopathy patterns in a surgical population and determine how often patients present with the standard textbook (ie, Netter diagram) versus nonstandard patterns.

PATIENT SAMPLE:   Patients who had single-level radiculopathy with at least 75% improvement of preoperative symptoms following ACDF were included.

OUTCOME MEASURES:   Epidemiologic variables were collected including age, sex, weight, body mass index, laterality of symptoms, duration of symptoms prior to operative intervention, and the presence of diabetes mellitus. The observed pattern of radiculopathy at presentation, including associated neck, shoulder, upper arm, forearm, and hand pain and/or numbness, was determined from chart review and patient-derived pain diagrams.

RESULTS:   Overall, 239 cervical levels were identified. The observed pattern of pain and numbness followed the standard pattern in only 54% (129 of 239; p=.35). When a nonstandard radicular pattern was present, it differed by 1.68 dermatomal levels from the standard (p<.0001). Neck pain on the radiculopathy side was the most prevalent symptom; it was found in 81% (193 of 239) of patients and did not differ by cervical level (p=.72). In a logistic regression model, none of the demographic variables of interest were found to significantly impact the likelihood of presenting with a nonstandard radicular pattern.

CONCLUSIONS:   Observed patterns of cervical radiculopathy only followed the standard pattern in 54% of patients and did not differ by the cervical level involved. Cervical radiculopathy often presents with a nonstandard pattern. Surgeons should think broadly when identifying causative levels because they frequently may not adhere to textbook descriptions in actual clinical practice. We observed III level of evidence.

Traditionally, it is taught that cervical radiculopathy presents in a reproducible dermatomal and myotomal pattern attributable to the involved cervical root level. [1–3]   Thus, for example, a C6 radiculopathy is classically described as symptoms radiating from the neck down the arm, terminating in the thumb and index finger. If advanced imaging shows root compression consistent with the clinically suspected level, a specific diagnosis can be made. Identification of the exact root level(s) causing radiculopathy can be important in all patients but is absolutely critical in those who elect to have surgery for refractory symptoms.

In clinical practice, however, patients may present with radicular symptoms that do not perfectly fit the standard, textbook “Netter diagram” patterns based on the description by Keegan and Garrett [13]   Under these circumstances, proper identification of levels to target surgically can be difficult in those who fail nonoperative care. Uncertainty can lead to unnecessarily treating a level that is not actually causing symptoms or no surgery at all in a patient who might benefit from it for fear that the proper symptom generator can not been identified.

Brachial plexus variability is one potential cause of symptom variability in cervical radiculopathy. Anatomic dissections suggest that a typical “textbook” brachial plexus is only observed in 37–77%. [4–6]   Additionally, a number of anatomic studies have demonstrated considerable variation in the intradural connection of rootlets, which can potentially impact the ability to accurately localize the level of cervical pathology on the basis of clinical signs and symptoms. [7–11] While the anatomic variability makes a compelling rationale for clinical symptom variability, clinically-based assessments of cervical radicular patterns remain limited. One study reported more than two-thirds (69.7%) of cervical radiculopathy patients exhibited non-dermatomal radiculopathy symptoms. [12]   While this data is intriguing, this study included patients with evidence of multi-level disease, therefore leading to uncertainty as to which level is responsible for the observed patterns and confounding the results of the study. Currently, there are limited data on the variability with which cervical radiculopathy presents in real world situations and how often the actual presentation might deviate from the standard, textbook descriptions. Such information would be useful to surgeons making diagnoses as to a causative root level. The purposes of this study were therefore to examine cervical radiculopathy patterns in a surgical population undergoing single-level anterior cervical discectomy and fusion (ACDF) for refractory radiculopathy and to determine how often patients present with standard versus non-standard patterns. Single-level disease was chosen in order to correlate the presenting symptoms with an isolated root level.