Chiropractic or Osteopathic Manipulation for Children in the United States

Chiropractic or Osteopathic Manipulation for Children in the United States: An Analysis of Data from the 2007 National Health Interview Survey 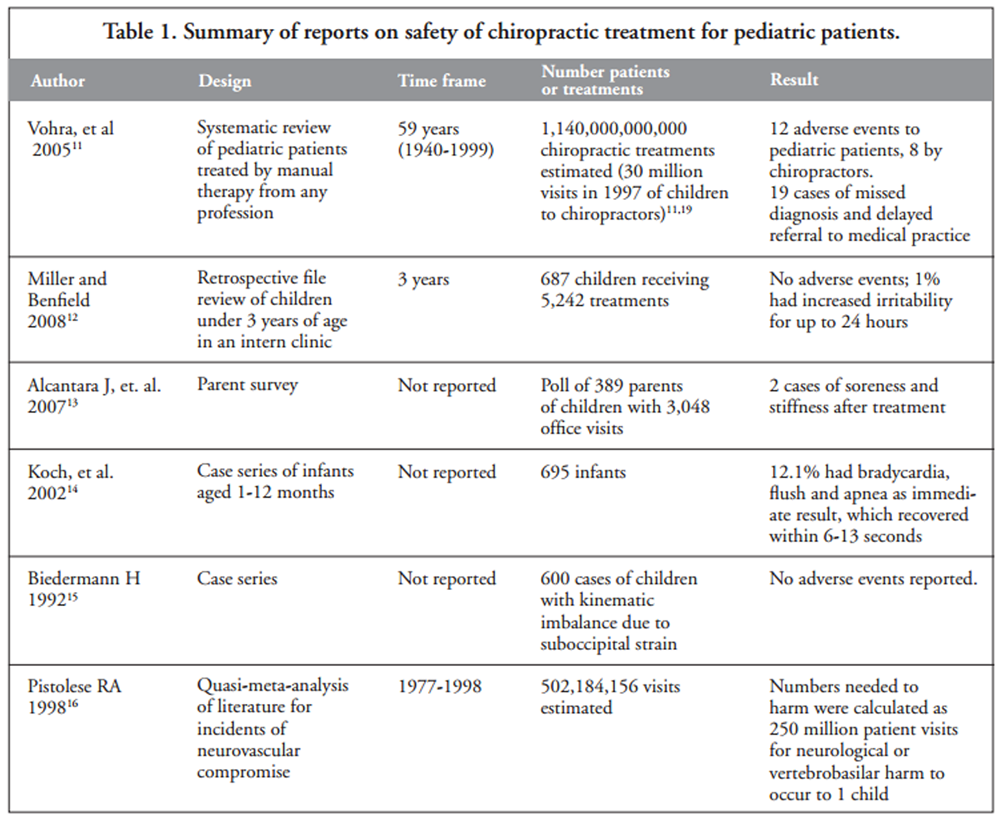 OBJECTIVES:   The aim of this study was to describe use of chiropractic and/or osteopathic manipulation by children in the United States along with the specific health conditions for which they sought care.

METHODS:   The study was a secondary data analysis of the National Health Interview Survey 2007, Child Alternative Medicine file as well as the Child Core Sample. National population estimates were generated for reported use of chiropractic or osteopathic manipulation (C/OM) by children for specific health conditions. Odds ratios (OR) and 95% confidence intervals (CI) were generated from binary logistic regression models that assessed the likelihood that children of specific characteristics would use this therapy.

RESULTS:   National estimates indicated that 2.3 million children (2.3%) in the United States had used C/OM in 2007. C/OM was the most common complementary and alternative medicine procedure. Children aged 12–18 years were more likely to have seen these providers than were younger age groups (OR=3.4 [95% CI, 2.1–5.5]). Homeopathy (1.2%), massage (1.0), and naturopathy (0.3%) were the next most common procedures. The most common complaints were back and neck pain. Other conditions for which children were seen included other musculoskeletal conditions, sinusitis, allergies, and nonmigraine headaches. Racial categories did not differ significantly regarding use of manipulation, but those children with both mother and father in the household were more likely to have used this form of care (OR=1.7 [95% CI, 1.1–2.6]).

CONCLUSIONS:   The chief limitations of this study were related to the construction of the questions available for analysis. First, chiropractic and osteopathic manipulation was combined in a single variable, making it impossible to make conclusions about the characteristics or complaints of patients of either practitioner. This is an important distinction, since osteopathic scope of practice includes the use of drugs and surgery as well as manipulation, so it is possible that patients who see osteopathic practitioners for manipulation might have different characteristics and chief complaints than those who see chiropractic practitioners. Chiropractic or osteopathic manipulation (C/OM) is primarily used for back and neck pain, which is increasing in prevalence in children. Teens are more likely to use it than are younger children.

Recent studies of complementary and alternative medicine (CAM) use in the United States indicate chiropractic care to be among the most commonly utilized of the CAM provider groups. [1] In addition, a 2002 study found it to be the most commonly used provider-based CAM service, although it may be utilized less than self-help strategies such as prayer or meditation. [2] The National Board of Chiropractic Examiners samples the chiropractic profession every 5 years, and the most recent analysis of practice characteistics published in 2010 indicated care for patients < 17 years of age increased 7.4% since 2005. [3] Self-reported survey data indicated that 7.7% of patients seen in doctor of chiropractic (DC) offices were ≤ 5 years and 9.4% were 6–17 years of age. Studies indicate that only a minority of parents informs their primary care physician when they use any type of CAM, [4] but more may be gradually doing so. [5]

Among the most common uses of chiropractic care in general are for back pain, neck pain, other musculoskeletal pain, and headaches. [4, 6] However, it has been suggested that pediatric or adolescent populations may present with a broader variety of complaints, including nonmusculoskeletal conditions. [7] Currently, there is a call by both pediatric and chiropractic groups for more research in the area of adolescent/pediatric care by doctors of chiropractic (DCs). [8–10] Of particular interest is to identify the characteristics of patients who see DCs, their reasons for seeking care, and the frequency and duration of that care. Although some large national data sets do include chiropractic, detailed information on patient and practice characteristics is often unavailable for analysis. The most recent National Health Interview Survey (NHIS), one of the few national surveys to include CAM-related questions, combined response categories related to manipulation to include chiropractic and osteopathic manipulation. [11] The NHIS has a subset that queried pediatric use of CAM and the types of conditions for which it is used. The purpose of this study was to describe use of chiropractic and/or osteopathic manipulation by children in the United States along with the specific health conditions for which they sought care, as reported within.