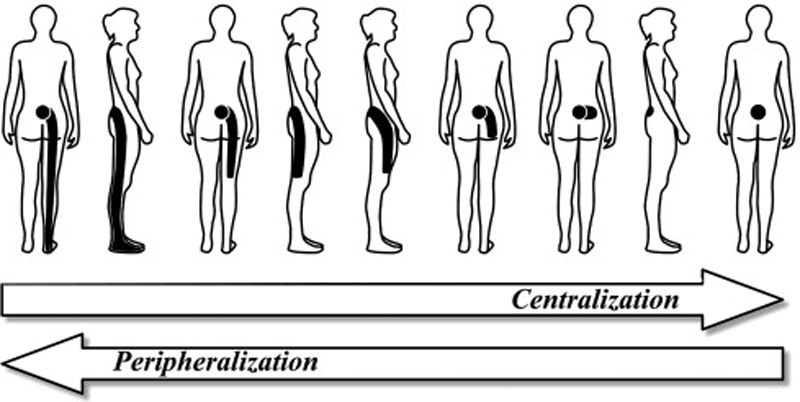 Centralization is a symptom response to repeated movements that can be used to classify patients into sub-groups, determine appropriate management strategies, and prognosis. The aim of this study was to systematically review the literature relating to centralization and directional preference, and specifically report on prevalence, prognostic validity, reliability, loading strategies, and diagnostic implications. Search was conducted to June 2011; multiple study designs were considered. 62 studies were included in the review; 54 related to centralization and 8 to directional preference. The prevalence of centralization was 44.4% (range 11%-89%) in 4,745 patients with back and neck pain in 29 studies; it was more prevalent in acute (74%) than sub-acute or chronic (42%) symptoms.

The treatment of back and neck pain remains controversial. Recent research has highlighted the value of reliable examination findings that can be used to predict response to different treatments (Long et al., 2004; Childs et al., 2004; Hicks et al., 2005; Long et al., 2008). Clinically induced symptom responses have been used to determine treatment; with spinal loads being used to induce lasting changes in the site or intensity of symptoms to determine prognosis and management. Such responses are intrinsic to a number of spinal classification or management systems (Fritz et al., 2003; McKenzie and May, 2003; Petersen et al., 2003; Murphy and Hurwitz, 2007; Tuttle, 2009). Probably the most researched clinically induced symptom response is centralization, which has been defined as the abolition of distal and spinal pain in response to repeated movements or sustained postures (McKenzie and May, 2003). Centralization has been the subject of 2 systematic reviews within the last decade, both of which were positive about its usefulness as a prognostic indicator (Aina et al., 2004; Chorti et al., 2009). The first of these reviews is no longer contemporary, and the second was on the prognostic value of symptom responses in general; only half of the 18 studies dealt specifically with centralization.

An associated, but separate phenomenon is that of directional preference, which has been defined as the repeated movement which induces centralization or abolition of symptoms, but also a decrease in symptom severity, and/or a positive mechanical response, such as an increase in range of movement (McKenzie and May, 2003). Movements in the opposite direction may cause these symptoms and signs to worsen. A finding of directional preference at baseline has been shown to predict a significantly better response to directional preference exercises than non-specific exercises (Long et al., 2004, 2008). A number of classification systems use this phenomenon, though not always termed as such, as a part of their assessment and management process (Fritz et al., 2003; McKenzie and May, 2003; Petersen et al., 2003; Van Dillen et al., 2003; Murphy and Hurwitz, 2007; Tuttle, 2009; Hall et al., 2009).