Bad is More Powerful Than Good: The Nocebo Response in Medical Consultations

Bad is More Powerful Than Good: The Nocebo Response in Medical Consultations

Although there has been a lot of research looking at the placebo response, nocebo responses in the healthcare setting have been largely overlooked. This article explores the potential role of negative patient-doctor communication in facilitating nocebo responses in the medical consultation. We suggest that invalidation, that is, communicating a lack of understanding and acceptance to the patient (albeit unintentionally), is a key factor in understanding the nocebo response. This article reviews evidence from the experimental and healthcare setting, which suggests that the negative effects of invalidation may be stronger than we think.

Much attention has been given to the so-called placebo response, that is, people getting better in response to sham or dummy treatments that contain no active ingredient. [1] The opposite nocebo response, that is, people getting worse in response to sham interventions, has also been recognized for a long time, but has resulted in less attention from health researchers, [2, 3] who often focus on the ethical concerns around knowingly inducing such responses. [4–6]

Sham or dummy interventions, by definition, contain no active ingredients. Thus, the placebo/nocebo response must result from some other component of these interventions, such as the context in which they are administered or the dialogue that takes place between patients and healthcare professionals. Two psychological theories dominate our thinking about the ways in which placebo/nocebo responses are mediated: conditioning and expectation. For example, if we always take a red painkilling pill to relieve a headache, soon taking an inert red pill can relieve our pain, because we have unconsciously learned to associate a red pill with pain relief (conditioning), or we expect the pill to work (expectation). There are plenty of data to support the relevance of each of these factors in both the placebo and nocebo responses, [6–10] yet the examination of other mechanisms involved, particularly in nocebo research, has largely been overlooked. Although a lot of work focuses on the nocebo responses that result from information provision about possible drug side effects, [11–15] little research has focused on the role of negative communication between doctor and patient (ie, human interactions) more generally in facilitating nocebo responses in the healthcare setting. 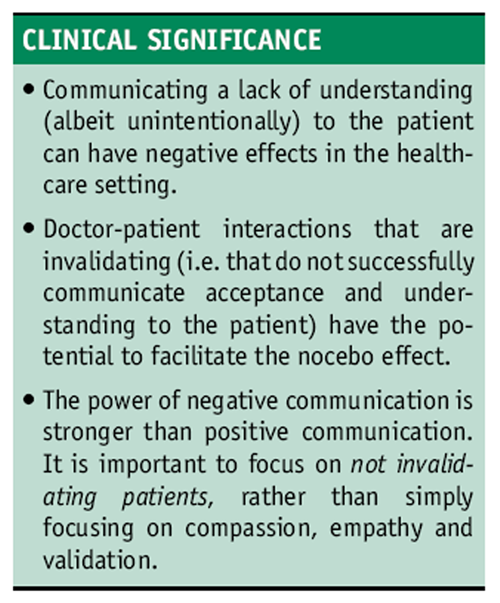 Häuser et al [3] suggest that “doctor-patient communication and the patient’s treatment expectations can have considerable consequences, both positive and negative, on the outcome of a course of medical therapy,” and yet there has been little consideration of the nocebo responses brought about by doctor-patient interactions. We propose that the nocebo response can be facilitated by the patient responding negatively to the conversations they have with healthcare providers, who are advising them about interventions designed to improve their health. Specifically, we believe that, as well as the mechanisms just described, a key factor in understanding the nocebo response is the concept of validation and invalidation.