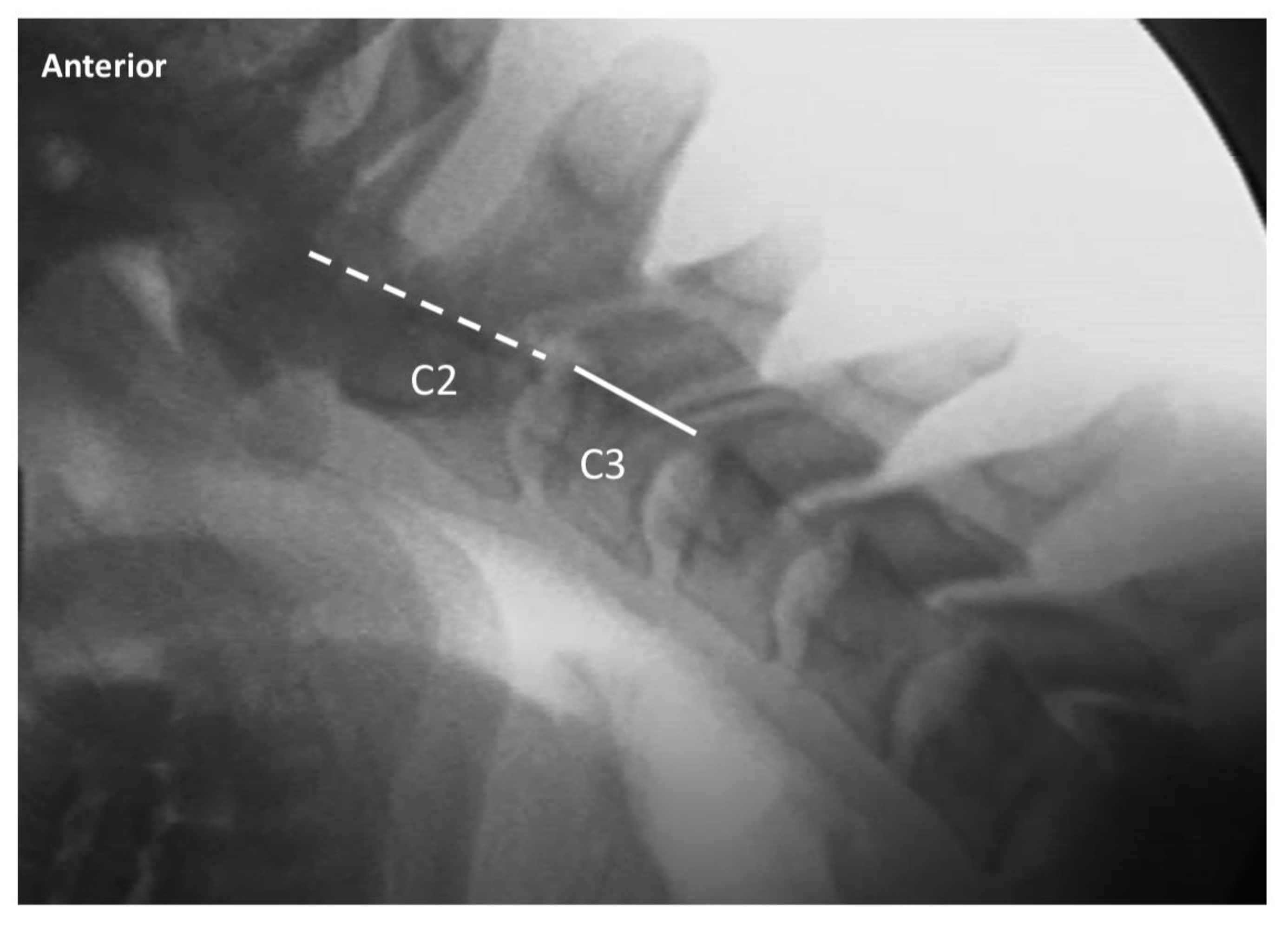 BACKGROUND:   Intervertebral instability is a relatively common finding among patients with chronic neck pain after whiplash trauma. Videofluoroscopy (VF) of the cervical spine is a potentially sensitive diagnostic tool for evaluating instability, as it offers the ability to examine relative intervertebral movement over time, and across the entire continuum of voluntary movement of the patient. At the present time, there are no studies of the diagnostic accuracy of VF for discriminating between injured and uninjured populations.

METHODS:   Symptomatic (injured) study subjects were recruited from consecutive patients with chronic (>6 weeks) post-whiplash pain presenting to medical and chiropractic offices equipped with VF facilities. Asymptomatic (uninjured) volunteers were recruited from family and friends of patients. An ethical review and oversight were provided by the Spinal Injury Foundation, Broomfield, CO.

Radiology Page and the:

END_OF_DOCUMENT_TOKEN_TO_BE_REPLACED

The motions of individual intervertebral joints can affect spine motion, injury risk, deterioration, pain, treatment strategies, and clinical outcomes. Since standard kinematic methods do not provide precise time-course details about individual vertebrae and intervertebral motions, information that could be useful for scientific advancement and clinical assessment, we developed an iterative template matching algorithm to obtain this data from videofluoroscopy images.

To assess the bias of our approach, vertebrae in an intact porcine spine were tracked and compared to the motions of high-contrast markers. To estimate precision under clinical conditions, motions of three human cervical spines were tracked independently ten times and vertebral and intervertebral motions associated with individual trials were compared to corresponding averages. Both tests produced errors in intervertebral angular and shear displacements no greater than 0.4° and 0.055 mm, respectively.

END_OF_DOCUMENT_TOKEN_TO_BE_REPLACED

Does Inter-vertebral Range of Motion Increase After Spinal Manipulation? A Prospective Cohort Study

Does Inter-vertebral Range of Motion Increase After Spinal Manipulation? A Prospective Cohort Study

Background   Spinal manipulation for nonspecific neck pain is thought to work in part by improving inter-vertebral range of motion (IV-RoM), but it is difficult to measure this or determine whether it is related to clinical outcomes.

Objectives   This study undertook to determine whether cervical spine flexion and extension IV-RoM increases after a course of spinal manipulation, to explore relationships between any IV-RoM increases and clinical outcomes and to compare palpation with objective measurement in the detection of hypo-mobile segments.

Method   Thirty patients with nonspecific neck pain and 30 healthy controls matched for age and gender received quantitative fluoroscopy (QF) screenings to measure flexion and extension IV-RoM (C1-C6) at baseline and 4-week follow-up between September 2012-13. Patients received up to 12 neck manipulations and completed NRS, NDI and Euroqol 5D-5L at baseline, plus PGIC and satisfaction questionnaires at follow-up. IV-RoM accuracy, repeatability and hypo-mobility cut-offs were determined. Minimal detectable changes (MDC) over 4 weeks were calculated from controls. Patients and control IV-RoMs were compared at baseline as well as changes in patients over 4 weeks. Correlations between outcomes and the number of manipulations received and the agreement (Kappa) between palpated and QF-detected of hypo-mobile segments were calculated.

Results   QF had high accuracy (worst RMS error 0.5o) and repeatability (highest SEM 1.1o, lowest ICC 0.90) for IV-RoM measurement. Hypo-mobility cut offs ranged from 0.8o to 3.5o. No outcome was significantly correlated with increased IV-RoM above MDC and there was no significant difference between the number of hypo-mobile segments in patients and controls at baseline or significant increases in IV-RoMs in patients. However, there was a modest and significant correlation between the number of manipulations received and the number of levels and directions whose IV-RoM increased beyond MDC (Rho=0.39, p=0.043). There was also no agreement between palpation and QF in identifying hypo-mobile segments (Kappa 0.04-0.06).

Conclusions   This study found no differences in cervical sagittal IV-RoM between patients with non-specific neck pain and matched controls. There was a modest dose-response relationship between the number of manipulations given and number of levels increasing IV-RoM – providing evidence that neck manipulation has a mechanical effect at segmental levels. However, patient-reported outcomes were not related to this.

Neck pain is a common condition which most people experience at some point in their lives, with self-reported incidence rates ranging from 15.5 to 213 per 1000 person years [1] and 12-month prevalence rates around 30-50%. The condition can also be a significant cause of work absence, [2, 3] decreased productivity [4] and increased healthcare costs. [5]

Spinal manipulation, mobilisation, exercise, analgesics, acupuncture and low level laser therapy have all been shown to provide at least some degree of short-term relief of neck pain in the absence of trauma. [6] Spinal manipulation or mobilisation, particularly combined with exercise, appears to confer marginal benefit over other interventions. [7, 8] However, trials investigating manipulation for neck pain have shown conflicting results [9, 10] and while some patients respond well, others derive little benefit. One step towards understanding this would be to further our knowledge of the mechanism of action of manipulation as an intervention.

There is evidence to suggest that manipulation can decrease pain and improve function and that this is probably associated with increased motion. Nansel et al. showed that a single manipulation could reduce asymmetry of passive regional cervical spine motion, [11] while Cassidy et al. and Martinez-Segura et al. independently found that manipulation was associated with both reduced neck pain and increased regional range of neck motion immediately after treatment. [12, 13] However, regional neck range of motion is also influenced by pain, disability and fear of movement, [14] leaving the role of manipulation ambiguous. Furthermore, spinal manipulation targets specific levels, often to improve intervertebral range of motion (IV-RoM), [15] but it is not known if this actually happens, or if reduced IV-RoM is even detectable by clinical examination (palpation). To begin to explain the therapeutic effects of neck manipulation therefore requires an accurate and reproducible means of measuring maximum IV-RoM wherever it occurs in the neck bending sequence, and relating it to symptomatic changes following a course of manipulative treatment. It is also necessary to know whether reduced motion at inter-vertebral levels as detected by palpation as the basis for a manipulation can be verified.

Cineradiography and videofluoroscopy have allowed the visualisation of complete intervertebral motion sequences and have been available for many yearr, [16, 17] but analysis of the motion has been largely qualitative. However, during the last decade considerable progress has been made with detailed measurement of inter-vertebral motion using quantitative fluoroscopy (QF). [18] It is now possible to track fluoroscopic images of lumbar vertebrae continuously throughout lumbar motion in living subjects [19] allowing the measurement of true IV-RoM, regardless of where it occurs during bending. QF has been found to have good reproducibility for this, [20] but has not yet been validated or extensively used in the cervical spine. This study aimed to explore the effects of neck manipulation on IV-RoM in the cervical spine as measured by QF.

The study had four main objectives: