The Passing of a Giant – Chester Wilk dies at 91

Shared from the World Federation of Chiropractic Facebook page 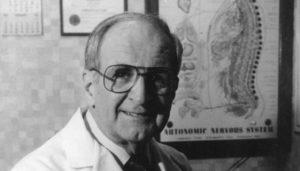 Dr Chester A. Wilk, the chiropractor famed for taking on the American Medical Association – and winning – passed away on Thursday, April, 21 at Advocate Lutheran Hospital, Park Ridge, Illinois.

The case of Wilk v AMA, an antitrust law suit, was a seminal moment in the profession’s history, at a time when chiropractors in the United States found themselves subjected to extreme prejudice and discrimination. The story of Chester Wilk’s epic battle is told in ‘Contain and Eliminate: the American Medical Association’s Conspiracy to Destroy Chiropractic’, written by Howard Wolinsky and published in 2021.

The persistence and fortitude of Wilk and his four co-plaintiffs, in the face of serious roadblocks to practicing as chiropractors, drove him to step up and take on the giant of healthcare. The David and Goliath story saw him consumed by his mission to expose the injustice and the covert Committee on Quackery that had been set up by the AMA to undermine and destroy chiropractic.

Starting in the 1970s, the legal battle continued for years, before a 1987 judgment by Judge Susan Getzendanner ruled that the AMA had illegally engaged in an unlawful conspiracy, a judgment subsequently upheld in 1990 in the Court of Appeals.

The impact of Wilk v AMA was huge. Doors that had previously been firmly shut opened up to allow interprofessional care and changes in the AMA’s ethical rules permitted referral by medical doctors to doctors of chiropractic.

We mourn the passing of Dr Wilk and recognize with gratitude the life of one of the legendary figures of the chiropractic profession.

Chiro.org has compiled a comprehensive page on the Wilk Anti-tust suit.