Reading Pain in a Human Face

How well can computers interact with humans? Certainly computers play a mean game of chess, which requires strategy and logic, and “Jeopardy!,” in which they must process language to understand the clues read by Alex Trebek (and buzz in with the correct question).

But in recent years, scientists have striven for an even more complex goal: programming computers to read human facial expressions. 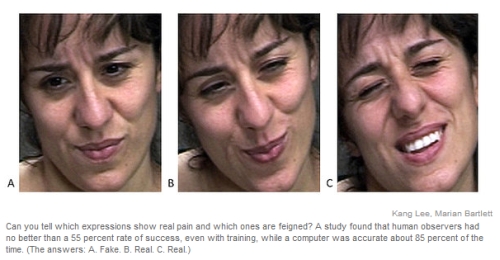 Take a quiz on the New York Times website and see how well you do recognizing  real pain.

The practical applications could be profound. Computers could supplement or even replace lie detectors. They could be installed at border crossings and airport security checks. They could serve as diagnostic aids for doctors.

Researchers at the University of California, San Diego, have written software that not only detected whether a person’s face revealed genuine or faked pain, but did so far more accurately than human observers.