Prevalence and Incidence of Musculoskeletal Extremity

Prevalence and Incidence of Musculoskeletal Extremity Complaints in Children and Adolescents. A Systematic Review 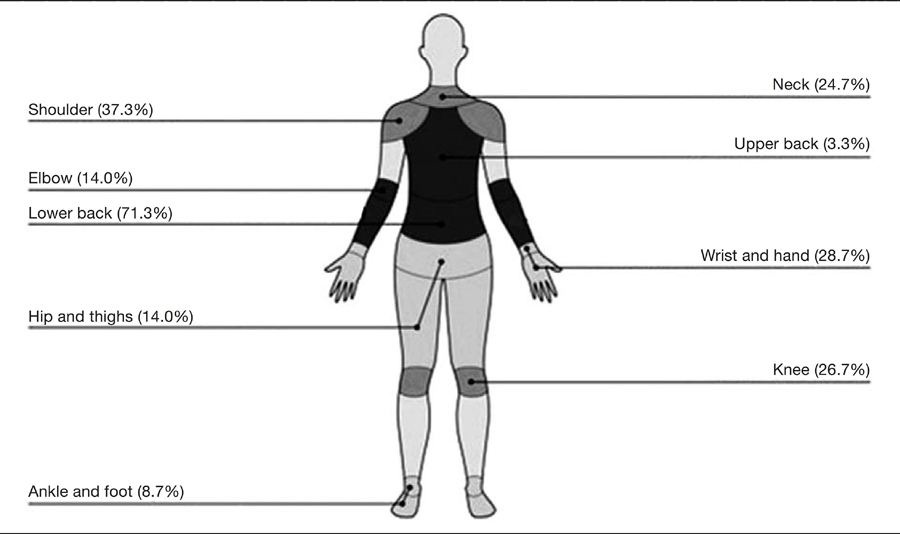 BACKGROUND:   It is difficult to gain an overview of musculoskeletal extremity complaints in childhood although this is essential to develop evidence-based prevention and treatment strategies. The objectives of this systematic review were therefore to describe the prevalence and incidence of musculoskeletal extremity complaints in children and adolescents in both general and clinical populations in relation to age, anatomical site and mode of onset.

METHODS:   MEDLINE and EMBASE were electronically searched; risk of bias was assessed; and data extraction was individually performed by two authors.

CONCLUSIONS:   This review shows that musculoskeletal complaints are more frequent in the lower extremities than in the upper extremities in childhood, and there are indications of a large amount of non-traumatic low intensity complaints in the population that do not reach threshold for consultation. A meta-analysis, or even a simple overall description of prevalence and incidence of musculoskeletal extremity complaints in children and adolescents was not feasible, due to a large variety in the studies, primarily related to outcome measurements.

Recently, the Global Burden of Disease studies reported musculoskeletal pain as one of the leading causes of years lived with disability [1] and this constitutes a substantial burden on society. [2] Therefore, it is important to design better prevention strategies and early effective treatment. To do that, more basic knowledge about the epidemiology of musculoskeletal complaints in children and adolescents must be obtained first.

Various terms have been used in relation to musculoskeletal extremity complaints (MEC), starting from the less severe ache to injury or more severe musculoskeletal disorders. Commonly, MEC are divided into traumatic and non-traumatic complaints, where a traumatic complaint has been defined as an injury resulting from a specific identifiable event, whereas a non-traumatic complaint is not related to an identifiable event. [10] In research of MEC, focus has traditionally been on either specific groups of athletes, or injuries reported at emergency departments, and patterns of paediatric injuries in relation to sport are therefore well described. [11–13] While this type of research provides valid information about specific injuries, mainly injuries of a traumatic onset, they do not represent the full picture of MEC in the general population. Specifically, none of these methods collect valid information about non-traumatic complaints in the general population, which has been shown to represent a large part, close to two thirds, of MEC. [14, 15]

The prevalence and treatment strategies of some types of specific injuries, e.g. fractures [16] and ankle distortions [17–19] are well described, but such knowledge has not been accumulated for many other types of musculoskeletal extremity complaints (MEC), e.g. overuse injuries and non-specific minor complaints. To inform the development of evidence-based prevention and treatment strategies, the first step is to increase knowledge about types and frequency of MEC in childhood. At present it is difficult to gain an overview of the extent of various types of complaints in relation to mode of onset (traumatic vs. non-traumatic), different anatomical locations and histological involvement. Therefore, the objectives of this systematic review were to investigate the prevalence and incidence of musculoskeletal extremity complaints in children and adolescents in both general and clinical populations in relation to age, distribution between different complaint sites, and types of complaints (traumatic vs. non-traumatic). Furthermore, differences between general and clinical populations will be explored.