Association Between Forward Head, Rounded Shoulders, and Increased Thoracic Kyphosis: A Review of the Literature 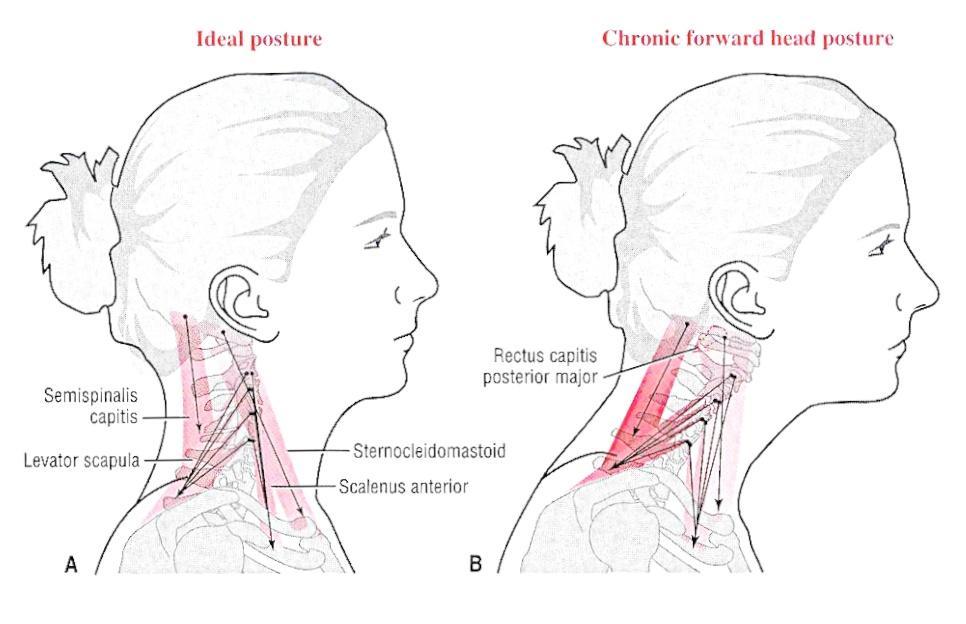 OBJECTIVE:   The purpose of this review was to explore the association between forward head posture, rounded shoulders, and increased thoracic kyphosis.

RESULTS:   Our initial search yielded 6,840 research studies, 6,769 of which were excluded because they either were duplicates or did not satisfy the inclusion criteria. After the abstracts of the remaining studies were read, 15 were assessed for eligibility, and only 4 papers were included in the present review. Cervical lordosis values were found to be significantly associated with thoracic kyphosis values. Also, there were significant correlations between rounded shoulders and increased thoracic kyphosis.

Various occupations require people to assume static postures for long periods, which causes continuous contractions of the head and neck muscles. [1, 2] The head constitutes 6% of the total body weight, which is linked to the cervical spine and all other joints through the kinematic chain [3] by various muscles.

Normal posture is defined as when the line of gravity (LOG) passes through the external auditory meatus, the bodies of the cervical spine, and the acromion and anterior to the thoracic spine [6] (Fig 1). Normally, the external moment produced by gravity and ground reaction forces at a joint is offset by the internal moment produced by various muscles and other soft tissue structures around that joint. However, presence of postural malalignments may require greater internal forces to balance the external torque produced by gravity, which in turn is exaggerated owing to the altered location of the LOG. [7-9]

Failure of the head to align with the vertical axis of the body [3, 10] (Fig 2) can lead to further malalignments in the body, namely, rounded shoulders and increased thoracic kyphosis, [11, 12] to compensate [13] for the altered location of the LOG, leading to further impairments. [14] Combination of all these postural deviations is often known as “slouched posture” [15, 16] or “slumped posture.” [3, 17]